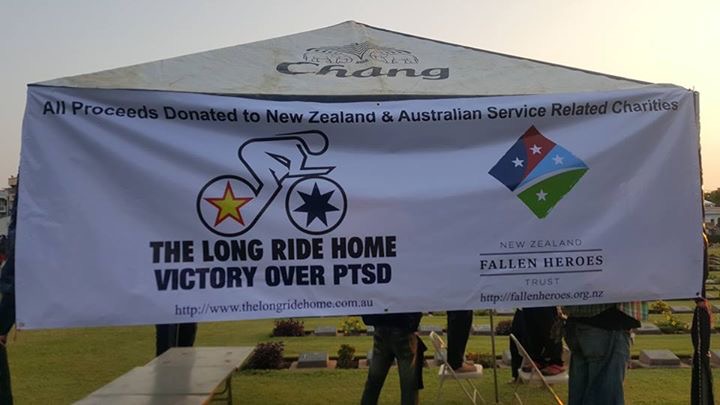 As per Anzac tradition, there is always a post Anzac Day activity worldwide and it was no different this year in Thailand. With support from our Australian/New Zealand Embassies and as per good olde Anzac tradition, a beer tent, sausage sizzler, and a two up event was organised to entertain the troops.

- Stewart Duncan - Organiser for the event.

- The Australian and New Zealand Embassy staff in Thailand.

- Fraser’s Jomtien for their outstanding efforts and their donation/support for the Anzac Day sausage sizzler.

- Local support volunteers assisting Slam Duncan on the pre planning, setting up of the charity event and manning the tents on the day for both TLRH and New Zealand Fallen Heroes Trust's charity.

- Visiting military personnel from Australia and New Zealand for their attendance at the fundraising event.

- The local ex pat community in Thailand and others visitors from overseas who, after paying respects to our fallen heroes, attended the social activities.

Such an event as this one held in Khanchanaburi not only helps bring us closer together but assists in the total victory over PTSD on a global scale.

On a final note - a huge thank you (Kawb Khun Krub) to the Thai community including local Thai military who support the Anzac Day service held every year, the dawn service at Hellfire Pass and later a service at the Commonwealth War Graves Khanchanaburi.

The Long Ride will continue on this year (2017) with a ride from Bangkok to Burma to retrace the steps of Australian and British Forces namely those part of F Force, including my father Pte. William Sams who detrained in Ban Pong near Bangkok after a long arduous journey locked in a steel box cart carriage from Singapore then forced marched to the Burma border.

This will be my third journey along the Thai Burma Death Railway since walking the complete 315km journey in 11 days (in 2002 and 2005) to pay homage to those who died during construction of the railway and to those who survived and suffered from PTSD for many years after.

Sadly, as a young boy growing up I saw the symptoms of PTSD deeply set in my father and uncle who survived the war. This year's ride will again pay homage to our fallen veterans - WW2 POWs - and those that suffered as a cause from their time on the Death Railway and a reminder that PTSD is still with us until there is total victory over this terrible sickness.

Many thanks and warmest regards to you all.