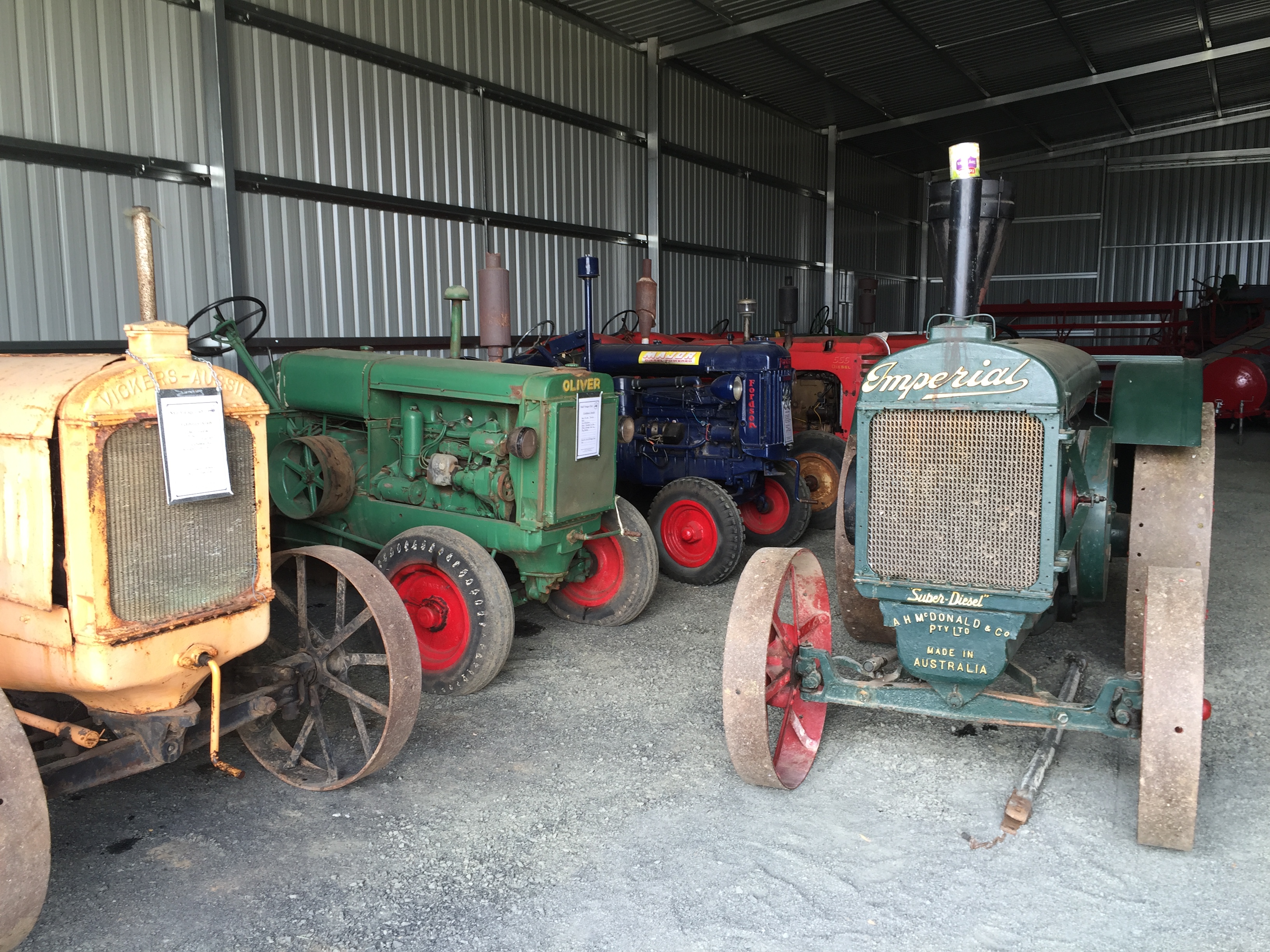 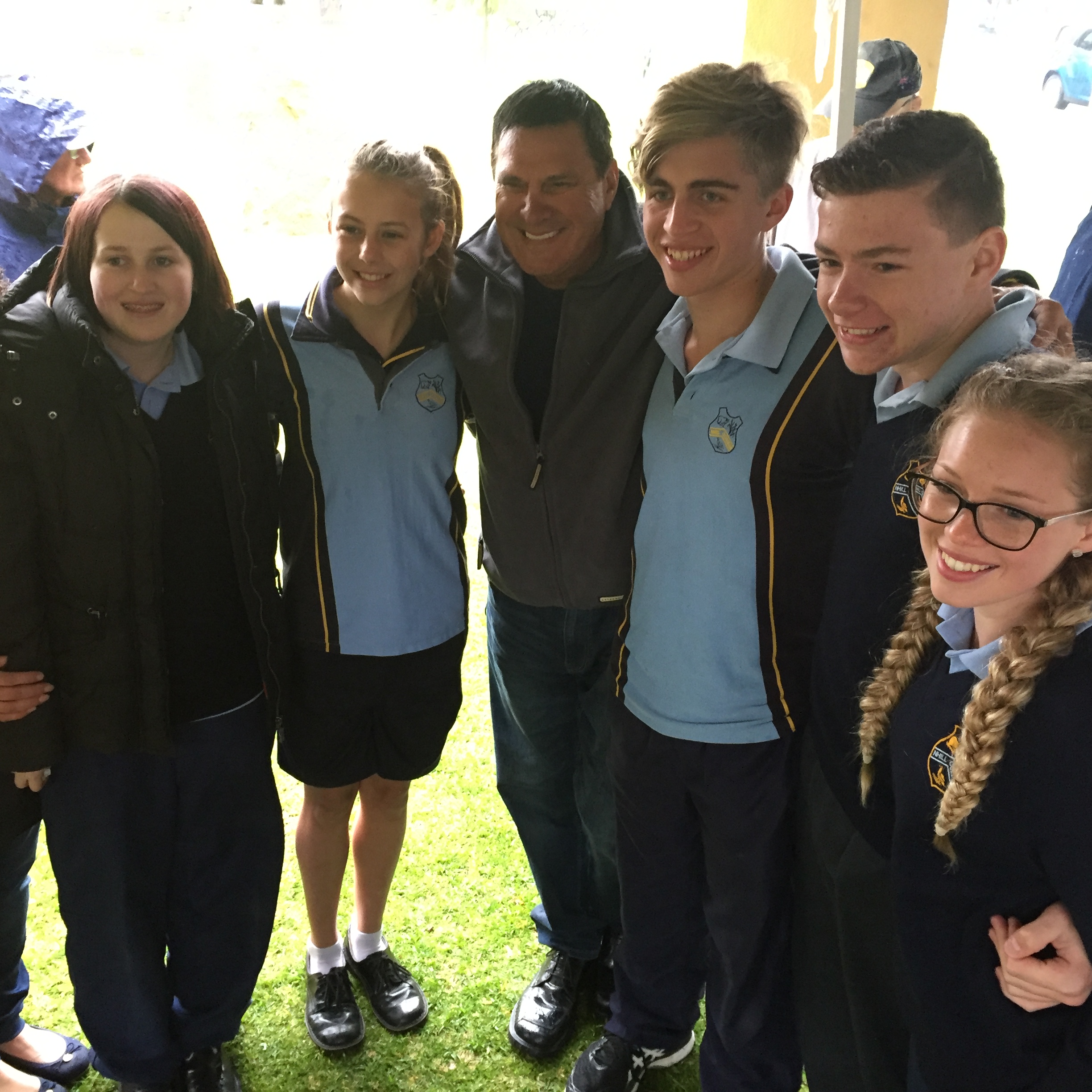 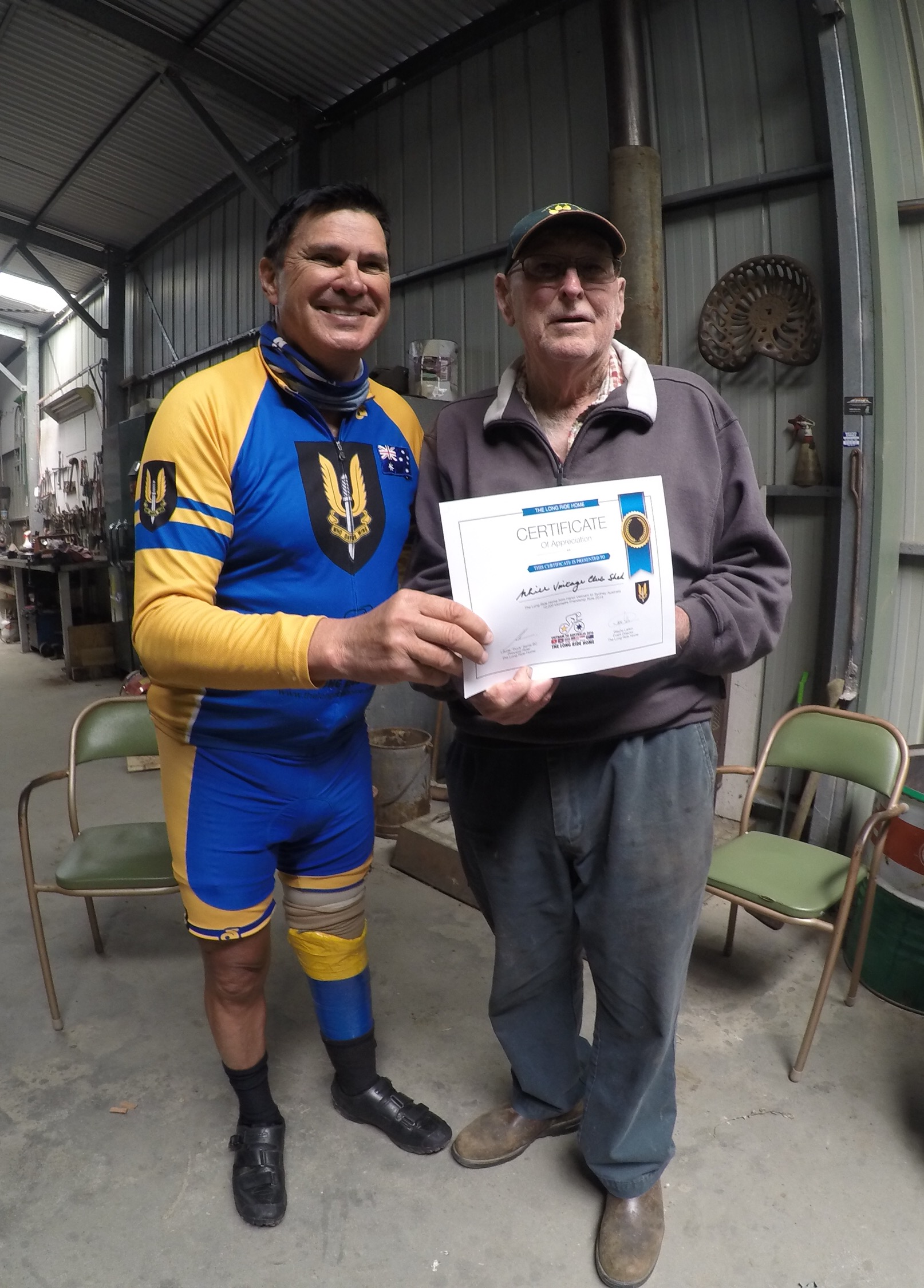 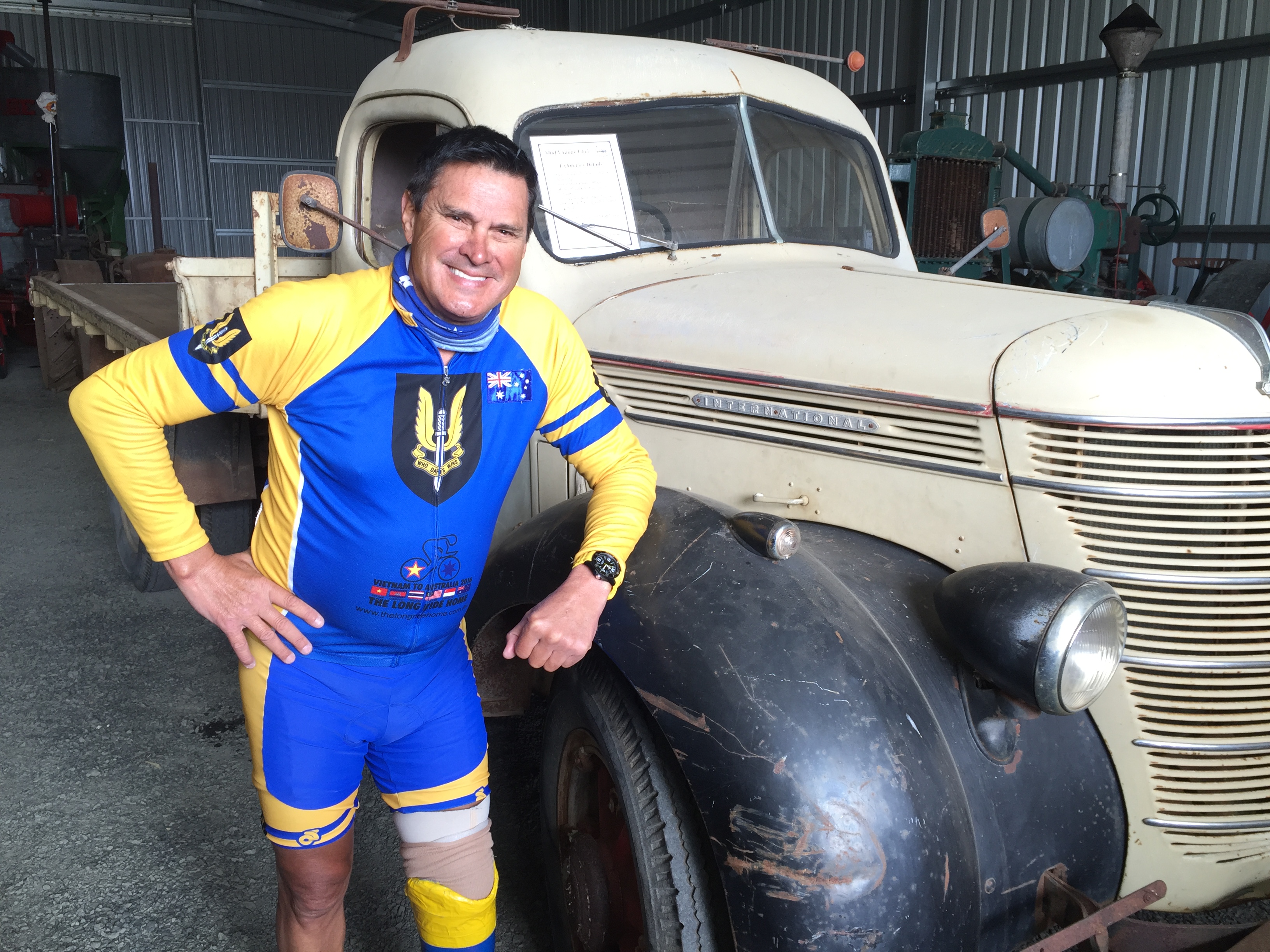 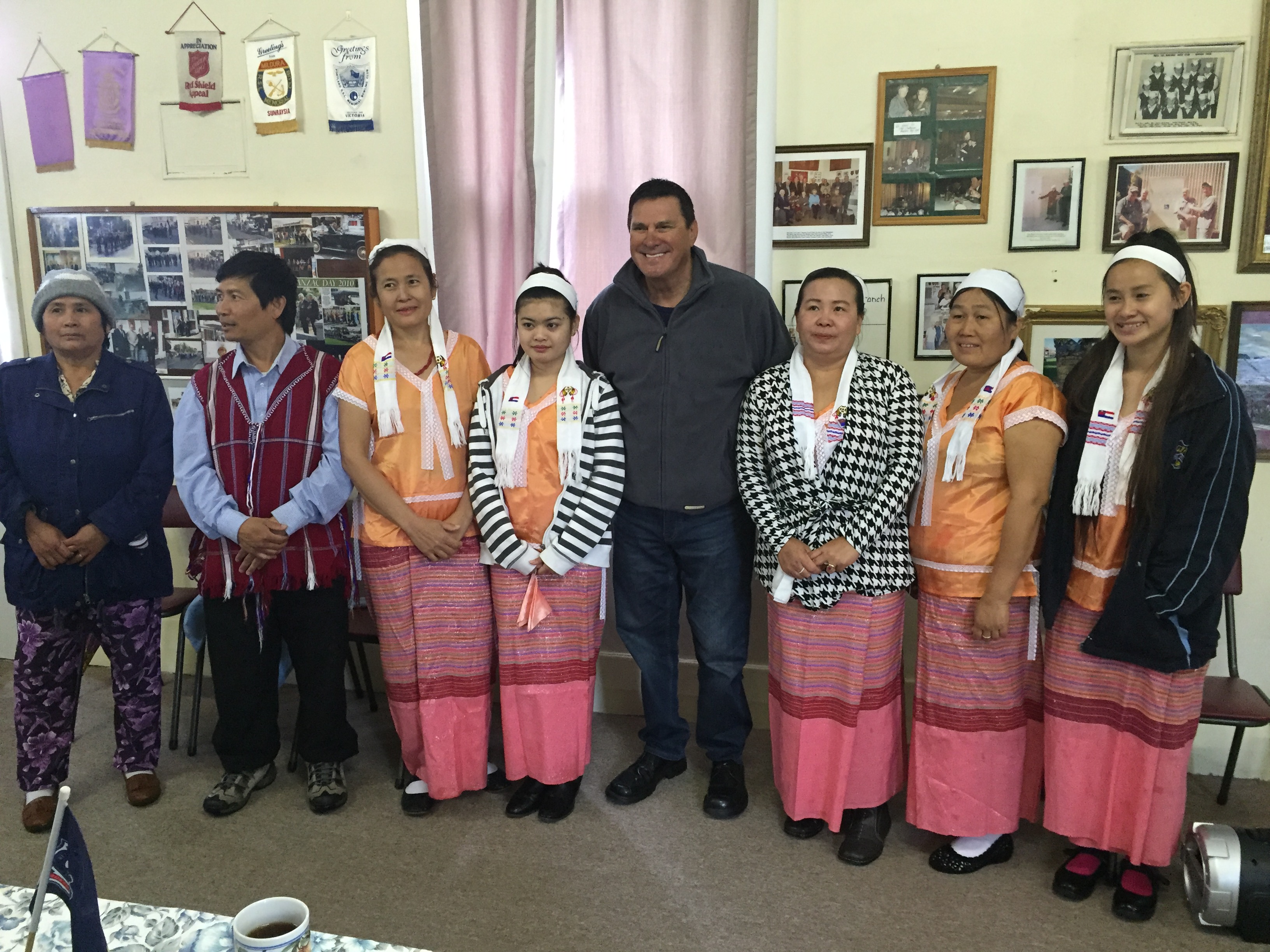 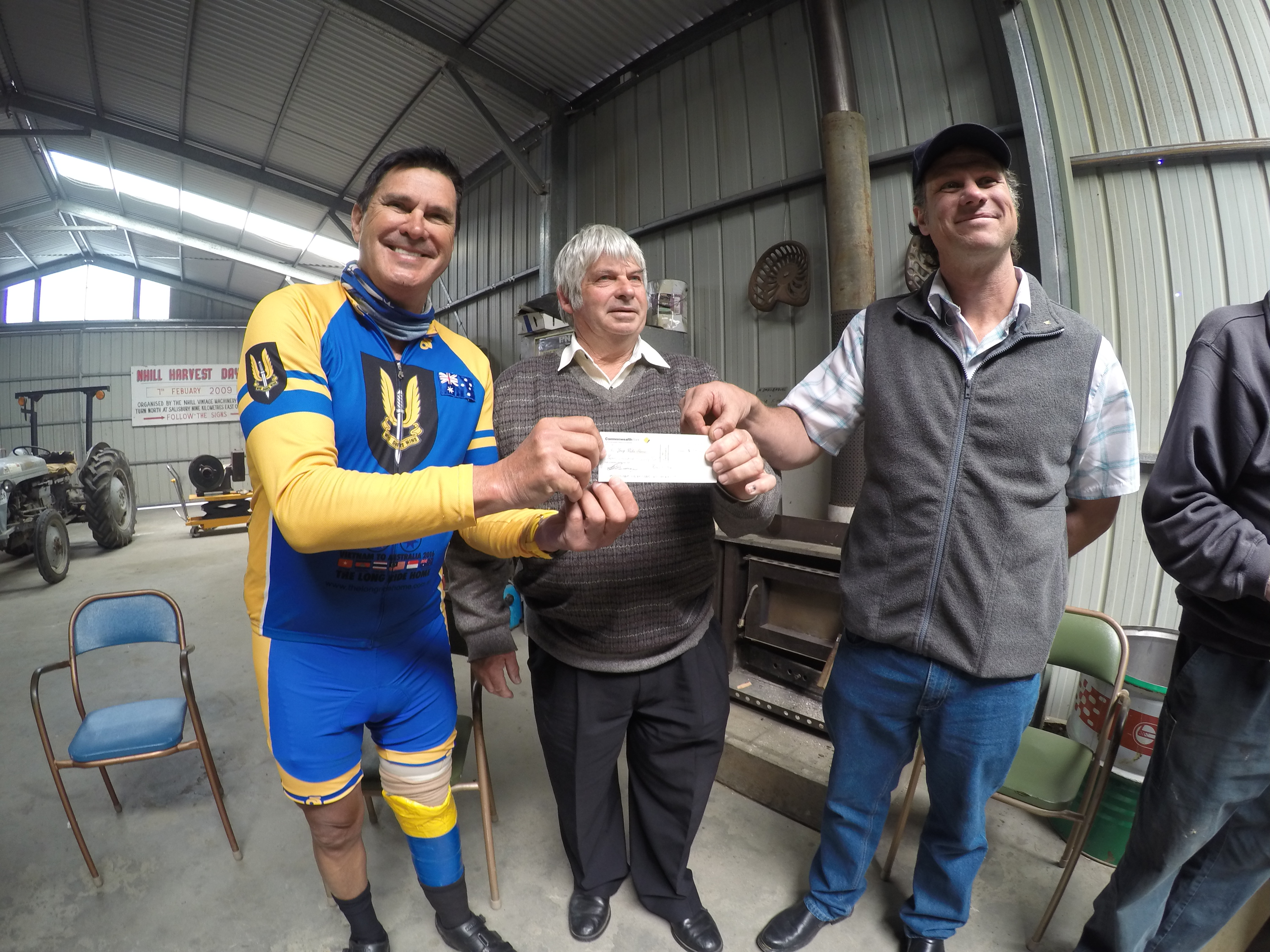 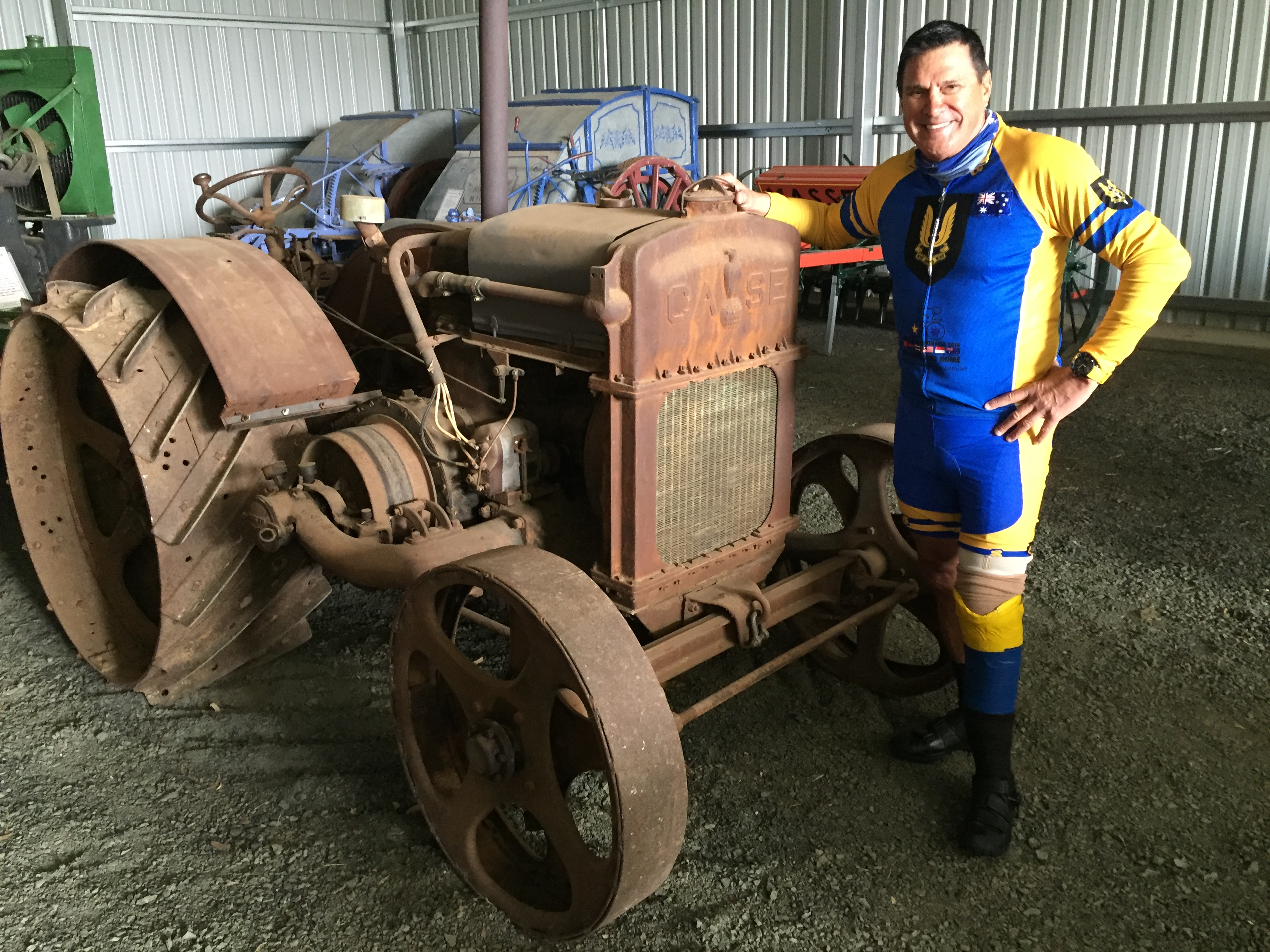 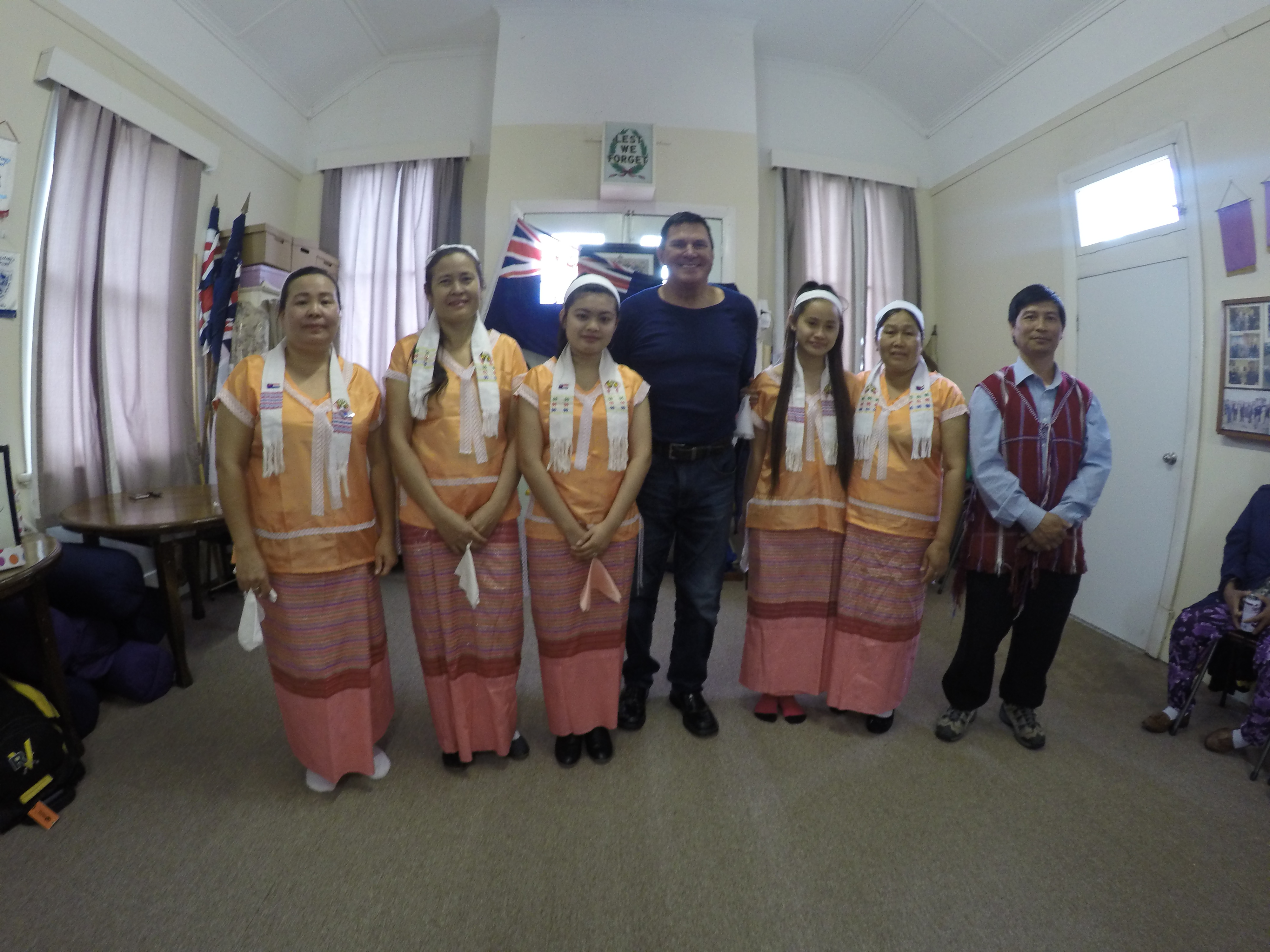 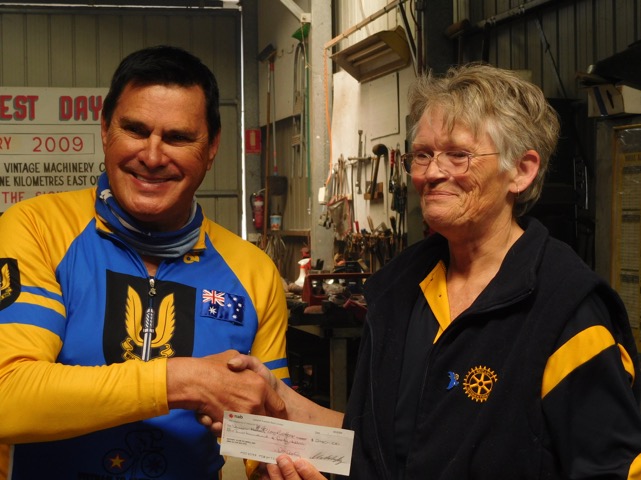 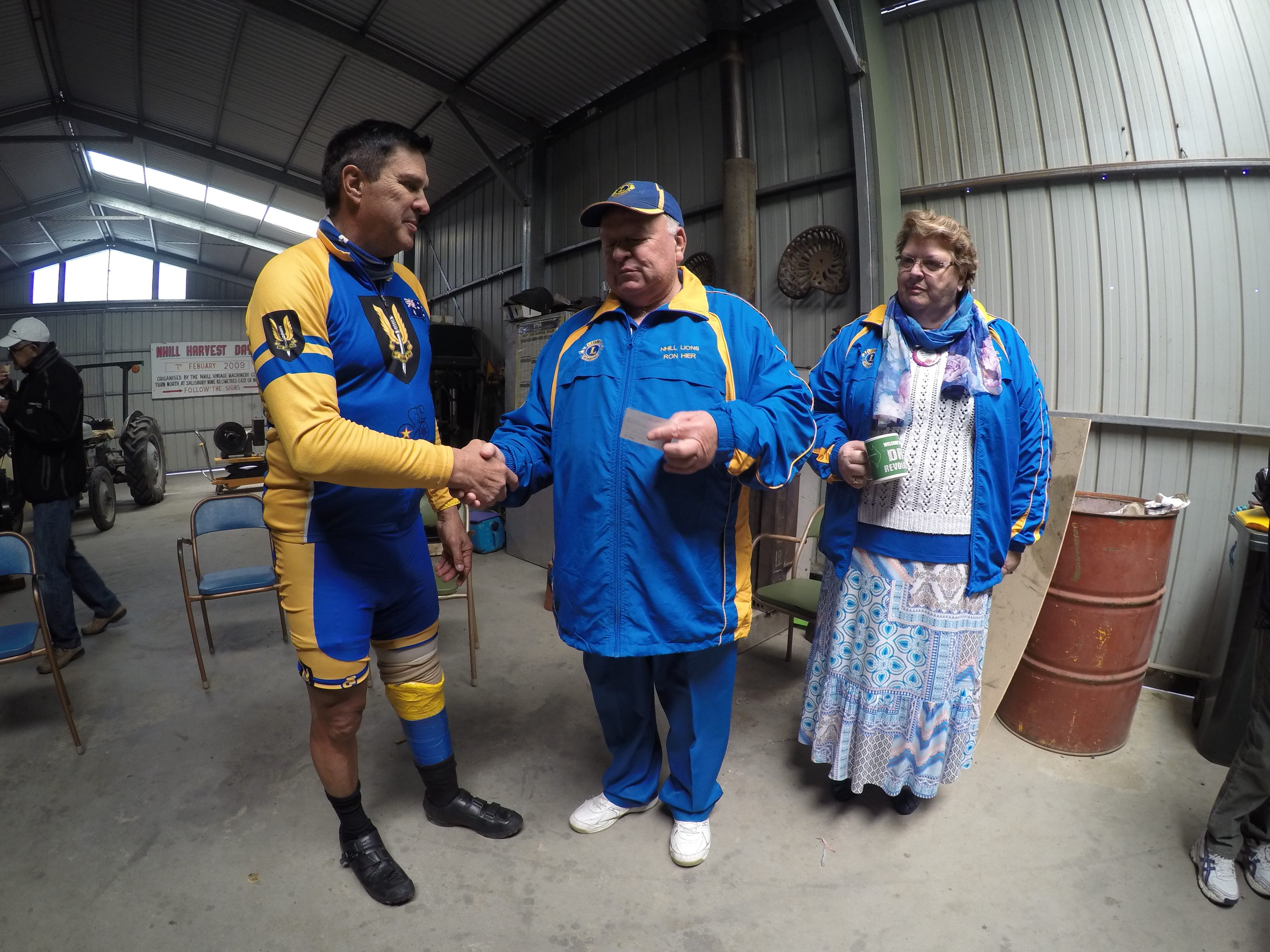 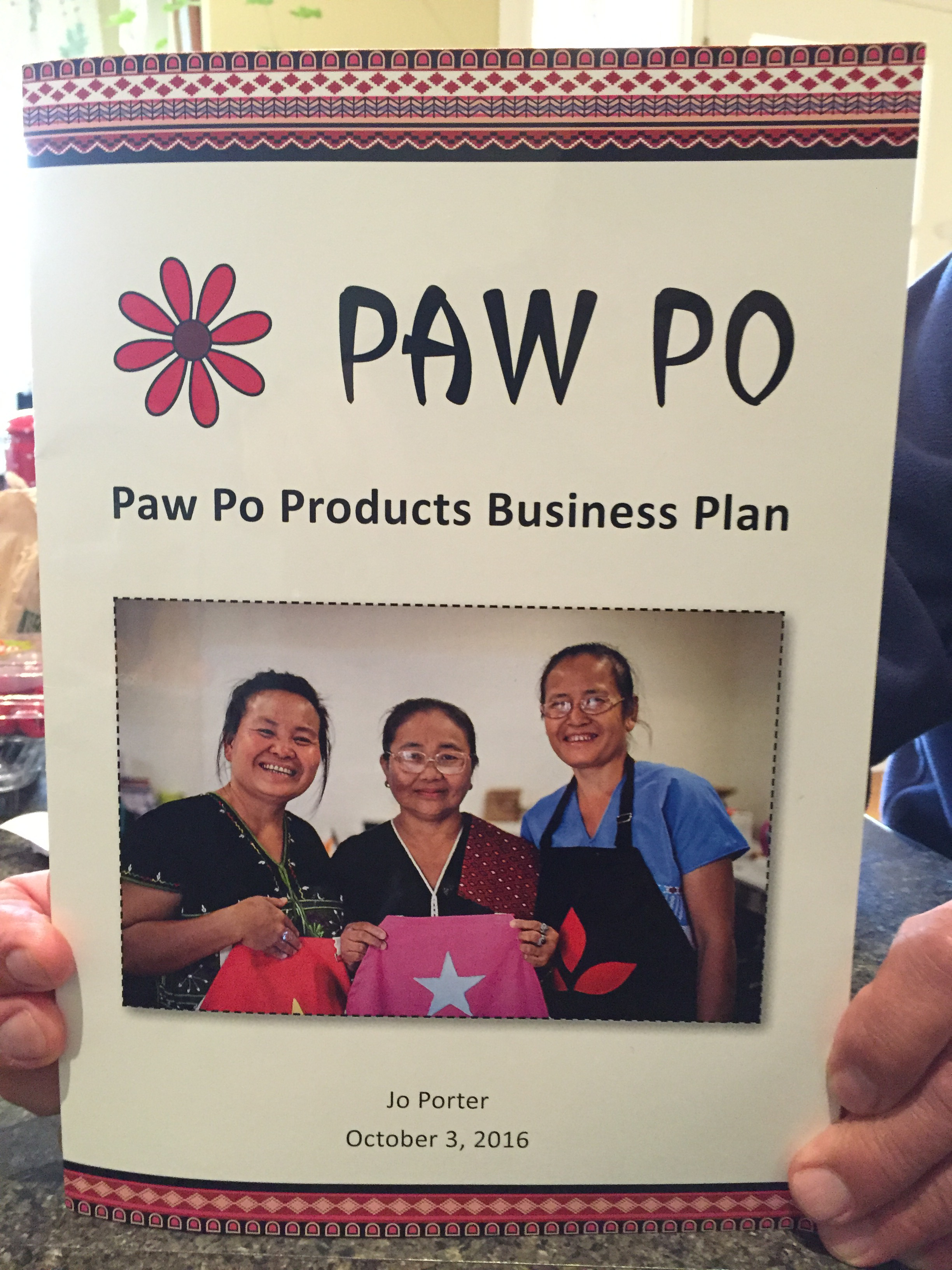 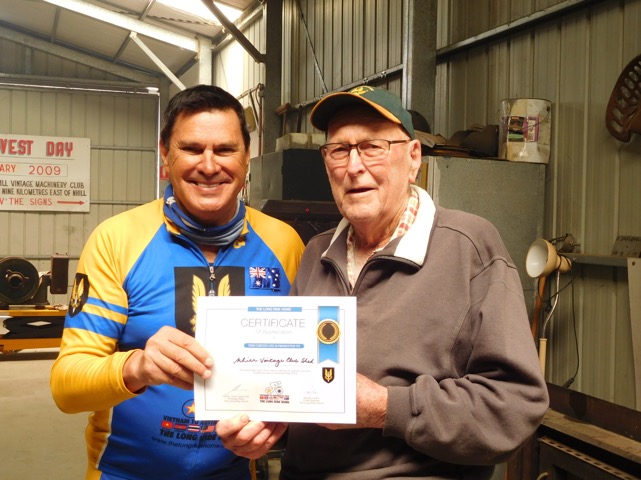 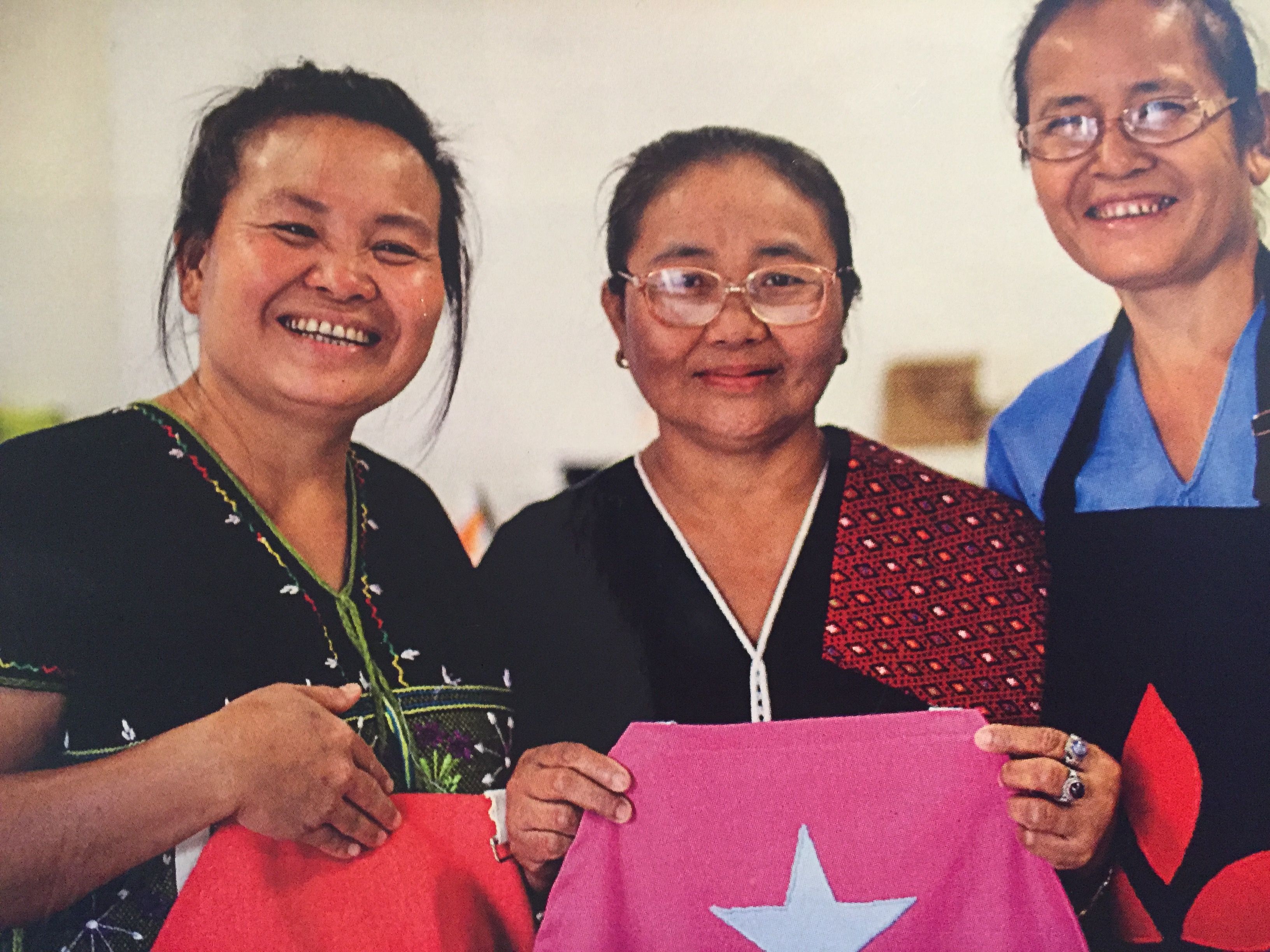 As mentioned in my last blog, it has been great weather for riding but I'm told that the weather could change in a heartbeat down this way. Leaving Bordertown today that was the case - heavy rain on crossing into Victoria and the temperature had plummeted rapidly as the heavens opened up to make my ride absolutely wet and freezing cold onwards to the town of Nhill. Trucks rumbled by spraying large amounts of water to make me even more wet and the roads even more dangerous and slippery.

I arrived in Nhill to a most warm welcome ceremony hosted by the local lions club CEO Greg Wood and Nhill College Students. The warm food and warm welcome certainly lifted the spirit, however, it became too cold for all involved so I was whisked off to the Nhill RSL to a more comfortable environment.

Quite a cultural experience to be had at the RSL with a welcome dance by the local Karen community dancers from Myanmar (Burma) who have been resettled here along with 180 others Karen from refugee camps along the Thai Burma border (Tak/Mae Sot to Mae Hong Son). John Millington, along with Kaw Doh (Karen leader and spokesperson), paid homage to the Karen people of Nhill who have resettled here over the years, proudly becoming naturalised Australian citizens and who have settled quite comfortable into the working and industrial life in and around the Nhill community. In discussions with the Deputy Mayor Wendy Robins I was impressed with how the Karen women have been supported and encouraged by the Hindmarsh Shire Council to utilise their marvellous cultural weaving skills in successfully setting up their own product shop "Paw Po" in the heart of Nhill.

According to the councils community profile on the Karen people in Nhill, they have brought significant benefits to the community after previous population decline having a negative impact on the local community affecting business, funding for education and health services and Council's ability to provide infrastructure. The Karen community's rapid growth is helping stop this decline, providing long term benefits for the community. Also after a talk with John Millington whose company has employed Karen workers for many years, he explained that some business organisations in the region have developed into a success stories primarily driven by such dedicated workers. Well done to the city of Nhill for your outstanding foresight into multiculturalism in Australia that can only be seen as a win win situation for the Hindmarsh Shire Council, the town of Nhill and the Karen community into the future.

The Karen, Kayin, Kariang or Yang people refer to a number of individual Sino-Tibetan language speaking ethnic groups, many of which do not share a common language or culture. These Karen groups reside primarily in Karen State, southern and southeastern Myanmar. The Karen make up approximately 7 percent of the total Burmese population with approximately 5 million people. A large number of Karen have migrated to Thailand, having settled mostly on the Thailand–Myanmar border.

The Karen groups as a whole are often confused with the Padaung tribe, best known for the neck rings worn by their women, but they are one sub-group of Red Karens (Karenni), one of the tribes of Kayah in Kayah State, Myanmar.

Some of the Karen, led primarily by the Karen National Union (KNU), have waged a war against the central Burmese government since early 1949. The aim of the KNU at first was independence. Since 1976 the armed group has called for a federal system rather than an independent Karen State.

Karen legends refer to a 'river of running sand' which ancestors reputedly crossed. Many Karen think this refers to the Gobi Desert, although they have lived in Myanmar for centuries. The Karen constitute the third biggest ethnic population in Myanmar, after the Bamars and Shans.

The term "Karen" is an umbrella term that refers to a heterogeneous lot of ethnic groups that do not share a common language, culture, religion or material characteristics. A pan-Karen ethnic identity is a relatively modern creation, established in the 1800s with the conversion of some Karens to Christianity and shaped by various British colonial policies and practices.

"Karen" is an Anglicisation of the Burmese word "Kayin" whose etymology is unclear. The word, which was originally a derogatory term referring to non-Buddhist ethnic groups, may have come from the Mon language, or is a corruption of Kanyan, the name of a vanished civilization.

In pre-colonial times, the low-lying Burmese and Mon-speaking kingdoms recognised two general categories of Karen, the Talaing Kayin generally lowlanders who were recognised as the "original settlers" and essential to Mon court life, and the Karen highlanders who were subordinated or assimilated by the Bamar.

A rest day after arriving in Nhill but plenty of hospitality from the local community, therefore , many thanks to:

* Helen Woodhouse - Herrick who was standing in the freezing cold rain waving the Australian flag as we arrived.

* The CEO Hindmarsh Shire Council Greg Wood and students from the Nhill College for their hospitality and speech on arrival.

* President of the RSL Henry Berry for the welcome at the RSL and sausage sizzler luncheon.

* Merv Schneider for the tour of the RAAF WW2 Aviation museum.

* Murray Moar for the Barb-B-Que Luncheon and tour of the Historical Vintage Museum at the Nhill Showgrounds also attended and assisted by members of the Lions, Rotary, Lowan Lodge Freemasons and RSL members.

A huge thank to the above organisations, members and individual who kindly donated a substantial amount and time towards the long ride home cause - a big thank you to those who donated;

3. Henry Berry for the Nhill RSL, and

Sponsored homes aren't easy to provide for the team on the road but a big mention of gratitude to Deputy Mayor Wendy Robins and her partner Darryl who opened their beautiful home up for the team during a rest period here. To Rhys and partner Lems for the same hospitality in sharing their home and for facilitating the team during a tour of the towns facilities. The only question the guys has for Rhys is - are there any organisation, association or club that you aren't a member of in Nhill Rhys????? Top work mate!!

A big thank you from the long ride home team to all the kind folks of Nhill for looking after the team on their rest day in Nhill.

The area has been home to the WotjobalukAboriginal people for thousands of years and was first visited by Europeans in 1845. The famous Aboriginal tracker and cricketer, Dick-a-Dick, later claimed to have been present at the first meeting between the Wotjobaluk and Europeans. Brothers Frank and John Oliver decided to build a flour mill on Crown land beside the Dimboola-Lawloit road, the township of Nhill grew from there.

Nhill was the first Victorian town after the state capital, Melbourne, to be supplied with electricity. Electric lighting was installed by 1892. Nhill airport, located 1.9km north-west of the town, served as a major RAAF training base during the Second World War, instructing over 10,000 aircrew in 1941-1946.

Nhill is a town in the Wimmera, in western Victoria, Australia. Nhill is located on the Western Highway, half-way between Adelaide and Melbourne. At the 2011 census Nhill had a population of 2278."Nhill" is believed to be a Wergaia word meaning "early morning mist rising over water"or "white mist rising from the water".

Many thanks.
Truck, Juvy, Dean, Terry and Ned Kelly on the long ride home in Victoria Australia