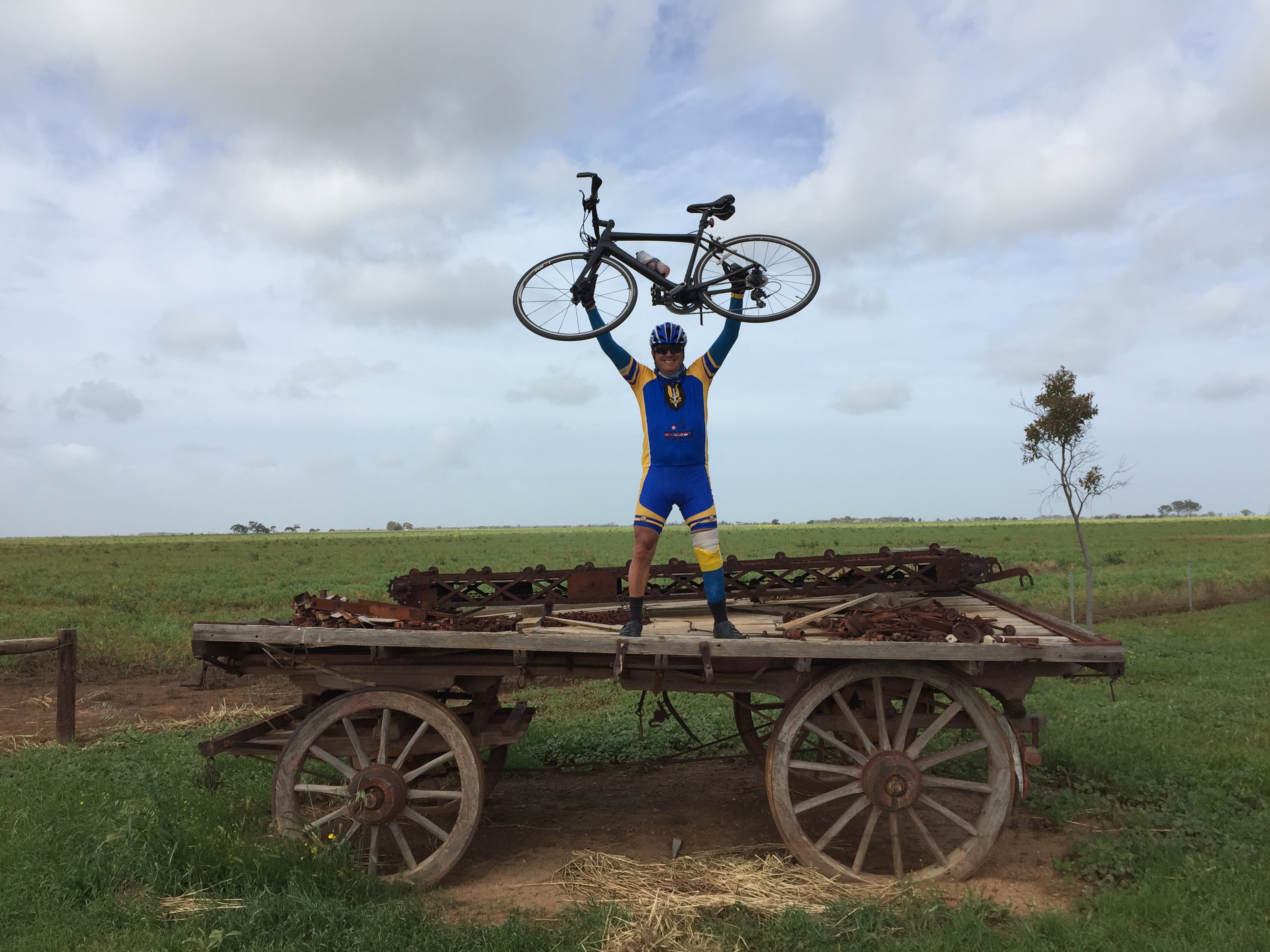 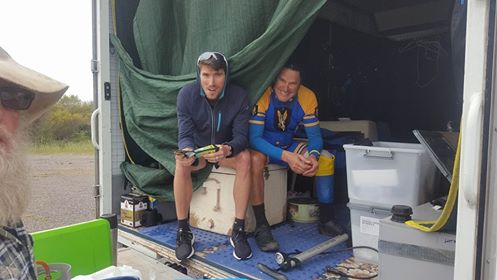 "Victory over PTSD" in big lettering on the side of our support truck to be seen by all as we continue along here in South Australia and onto Victoria, Canberra and NSW ahead. People passing by are tooting their horns and giving the long ride home team the big thumbs up, which now tells me we are getting there and the PTSD awareness is being heard since leaving Hanoi.

People are taking photos as they pass by and sending them to me on the long ride home Facebook commenting on where they saw me on route and how they weren't aware that our veterans weren't getting the proper care required after returning home from war. So the long ride home being about PTSD awareness is soldiering on as mentioned.

Some comments we have received:

"We just passed you 80km from Kimba. You are so inspiring! Best of luck for the rest of your journey."

"We saw you just outside of Ceduna pushing along in the downpour of rain. What a committed person you are for making aware of PTSD, well done and safe traveling."

A great welcome and outstanding donation from the Port Pirie RSL club on arrival with the Mayor of Port Pirie John Rohde, RSL president Malcolm "Bondy" Bond, RSL Vice President Mick Hipgood, Jeff Kenyon RSL Museum curator, Jack Lawrie (treasurer) and members in attendance to make our welcome a very warm one indeed. With a lot of well planned activities organised by the committee the donation towards the long ride home being quite substantial. A big well done and thank you to the committee and members of the Port Pirie RSL from myself and the team for your warm welcome, the lunch, planned activities to raise money for the long ride home cause, and the outstanding tour through the military museum.

Port Pirie is the sixth most populous city in South Australia after Adelaide, Mount Gambier, Whyalla, Murray Bridge and Port Lincoln. It is a seaport on the east coast of the Spencer Gulf, 223 km north of Adelaide. At June 2015 Port Pirie had an estimated urban population of 14,247.

The settlement was founded in 1845 and is the site of the world's largest lead smelter, operated by Nyrstar. It also produces refined silver, zinc, copper and gold.

Prior to European settlement, the location that became Port Pirie was occupied by the indigenous tribe of Nukunu. The location was called 'Tarparrie', which is suspected to mean "Muddy Creek". The first European to see the location was Matthew Flinders in 1802 as he explored the Spencer Gulf by boat. The first land discovery by settlers of the location was by the explorer Edward Eyre who explored regions around Port Augusta. John Horrocks also discovered a pass through the Flinders Ranges to the coast, now named Horrocks Pass.

The town was originally called Samuel's Creek after the discovery of Muddy Creek by Samuel Germein. In 1846, Port Pirie Creek was named by Governor Robe after the John Pirie, the first vessel to navigate the creek when transporting sheep from Bowman's Run near Crystal Brook. In 1848, Matthew Smith and Emanuel Solomon bought 85 acres (34 ha) and subdivided it as a township to be known as Port Pirie. Little development occurred on site and by the late 1860s there were only three woolsheds on the riverfront.

The government town was surveyed in December 1871 by Charles Hope Harris. The thoroughfares and streets were named after the family of George Goyder, Surveyor General of South Australia, with the streets running parallel and at right angles to the river. In 1873 the land of Solomon and Smith was re-surveyed and named Solomontown. On 28 September 1876, Port Pirie was declared a municipality, with a population of 947.

With the discovery of rich silver, lead and zinc-bearing ore at Broken Hill in 1883, and the completion of a narrow gauge railway from Port Pirie to close to the Broken Hill field in 1888, the economic activities of the town shifted. In 1889 a lead smelter was built by the British Blocks company to treat Broken Hill ore. Broken Hill Proprietary initially leased the smelter from British Blocks and then began constructing their own smelter from 1892. In 1915 the smelter was taken over by a major joint venture of Broken Hill-based companies, Broken Hill Associated Smelters (BHAS). Led by the Collins House Group, BHAS became the biggest lead smelter in the world by 1934.[The smelter gradually passed to Pasminco, then Zinifex, and is now operated by Nyrstar.

By 1921 the town's population had grown to 9801 living in 2308 occupied dwellings. By this date there were also 62 boarding houses to cater for the labour demands at the smelter and on the increasingly busy waterfront. Port Pirie was declared South Australia's first provincial city in 1953, and today it is South Australia's second largest port. It is characterised by a gracious main street and some interesting and unusual historic buildings.

Arrived in Clare to a civic reception by members of the council of Clare. Again, a fantastic warm welcome and a speech by John Coombe OAM (local government Clare) in the absence of the Mayor Allan Augery. The Clare RSL President Peter Lane Allan and SAS Association representative Kerry Lampard also in attendance for the welcome. From all TLRH staff and road team many thanks for an outstanding welcome on arrival Clare.

My thanks also to the Discovery Park Caravan Parks and Cabins in Clare, Bryce and Wendy Yon, and throughout the region ahead Tanunda as well for your kind donation free overnight camping sites for the team whilst passing through on the long ride home.

Also a big thank you to the Clare Valley Motel for a sponsored overnight stay complements of the owners Janece and Errol. Local businesses also assisted the team with discounts whilst on rest there. Tim from the local pharmacy giving me a personal discount on products - herbs and medicines required for my recovery before moving on ahead with many kilometers to go.

Thank you all that live in the beautiful town of Clare in South Australia. Great country town and warm country folks to add. A final big thank you to Trish and Kerry Lampard for a final send off Barb B Que and for Kerry's assistance in filming the local area for the long ride home in promoting the town of Clare.. Well done mate and thank you Clare !!!

The town of Clare is located in South Australia in the Mid North region, 136 km north of Adelaide. It gives its name to the Clare Valley wine and tourist region.

The first European to explore the district was John Hill, who in April 1839 discovered and named the Wakefield River and Hutt River. In early 1840 the first European settlers arrived in the district, led by John Horrocks. The town itself was established in 1842 by Edward Burton Gleeson, and named after his ancestral home of County Clare in Ireland.

The town was first named Inchiquin, which this was later changed. Lake Inchiquin is now the name of a reservoir located to the north of the town, near the golf club.

A railway line was built from Riverton to Clare in 1919 and on to Spalding in 1922. It closed in 1974 and the tracks were removed in the 1980s after damage caused by the Ash Wednesday fires of 1983. The alignment now carries the Riesling Trail walking and cycling trail.

The layout of the town's road system was apparently designed by a draughtsman in Adelaide, without any knowledge of the local geography. There are several roads in Clare that end abruptly at a cliff face, only to continue again at the top of the cliff.

As one of the larger towns in the region, Clare is an administrative and service centre for the surrounding area. It has two supermarkets, many other specialty stores, two public and two private schools, three hotels, two motels, a caravan park and showground.

Clare has become recognised for its 'experiences', including the Riesling Trailwalking and cycling route from 9 km north of Clare to Auburn (25 km), on the former railway alignment, so named as it weaves past vinyards and wineries, and continuing to Riverton as the Rattler Trail. The Clare Valley wine region continues within the same line of hills as the famous Barossa Valley, and also produces some excellent wines.

Moving on tomorrow towards the towns of Balaklava and Two Wells before rolling into Adelaide. My son William has returned to his Commonwealth Games Athletic team selection squad training in NZ after riding with me for about 4 days. I enjoyed his company whilst supporting me as co rider after riding solo since the Wheatbelt of WA when Mat Jones left the ride. My support driver/cook/Dixie basher (dishwasher) Gunny leaves the team in Adelaide to fly back to Perth. He has been an outstanding asset as part of the long ride home team since leaving Perth on the 5th September. He has endured long periods of driving each day, setting up camp with Juvy, getting food ready on most occasions, cleaning duties and a long separation from his family in Perth for the last 6 weeks. His around the campfire humour has kept the boys in stitches laughing being all part of keeping the morale high. I've since realised that his personal qualities for such a long period has been appreciated by all. Well done Gunny, you will be sadly missed by the team.

Warmest regard to all from the long ride home team in Clare South Australia
Truck, Juvy, Gunny, Terry and Ned Kelly