Katanning to Ongerup via Broomehill and Gnowangerup 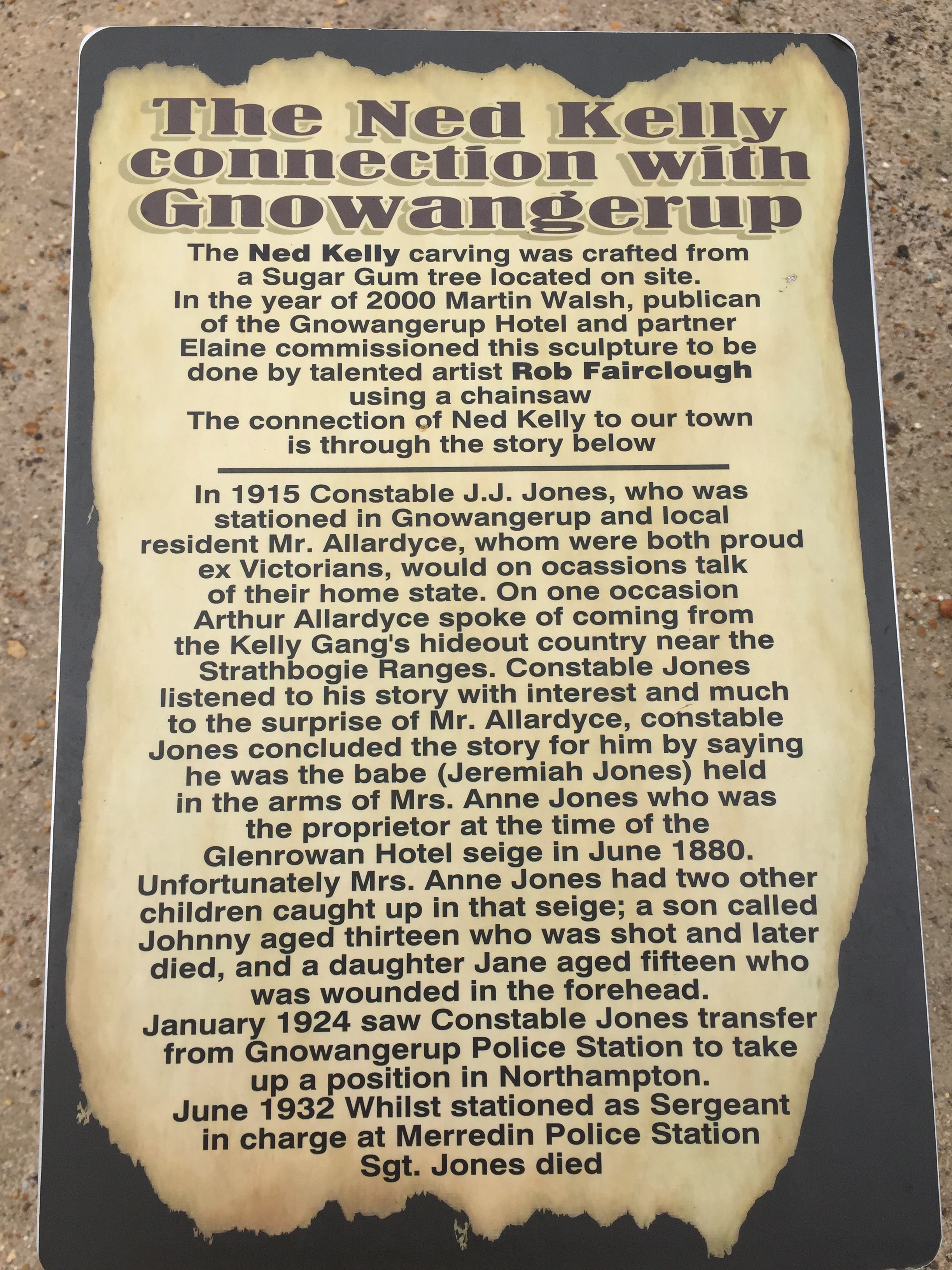 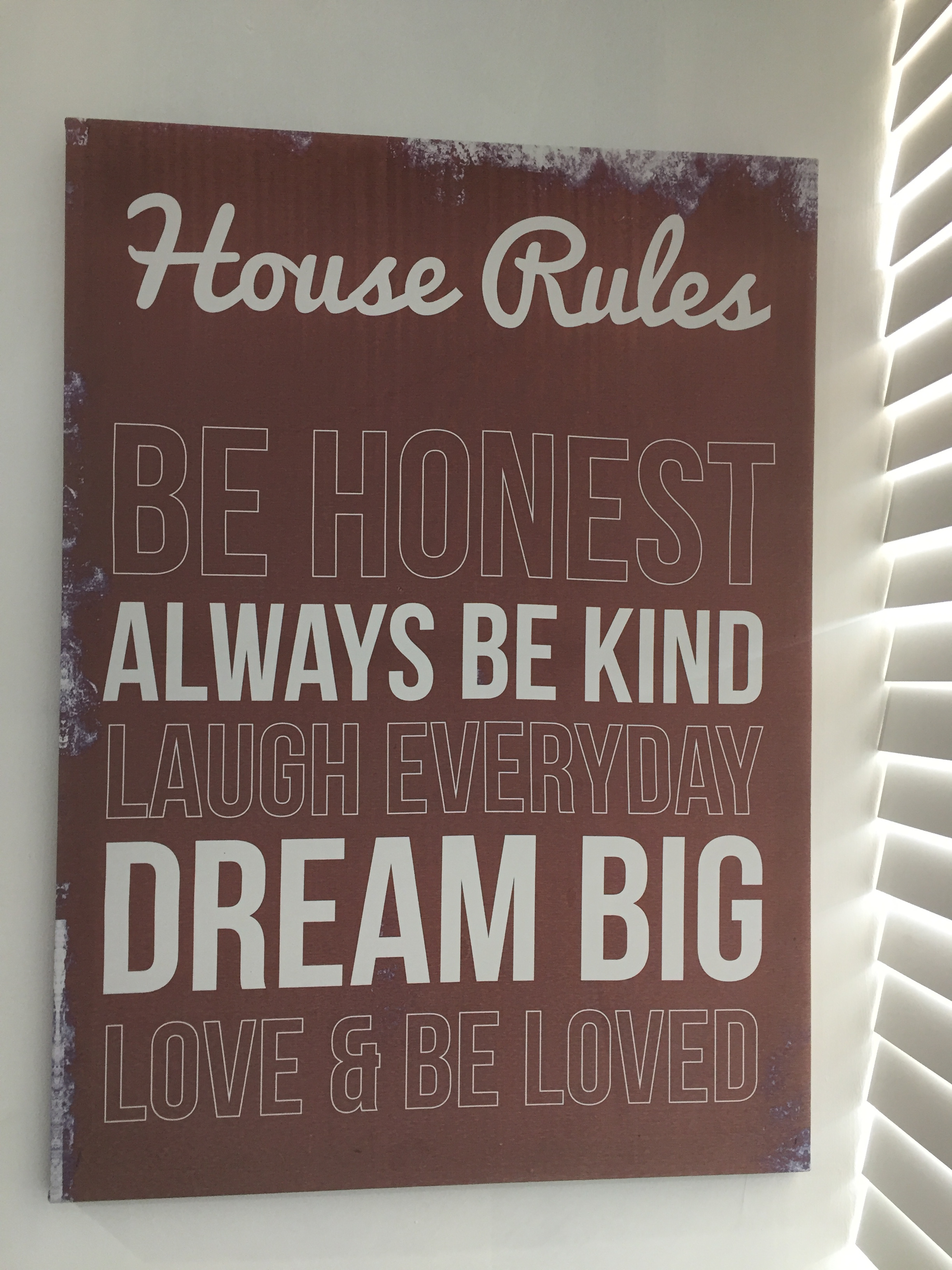 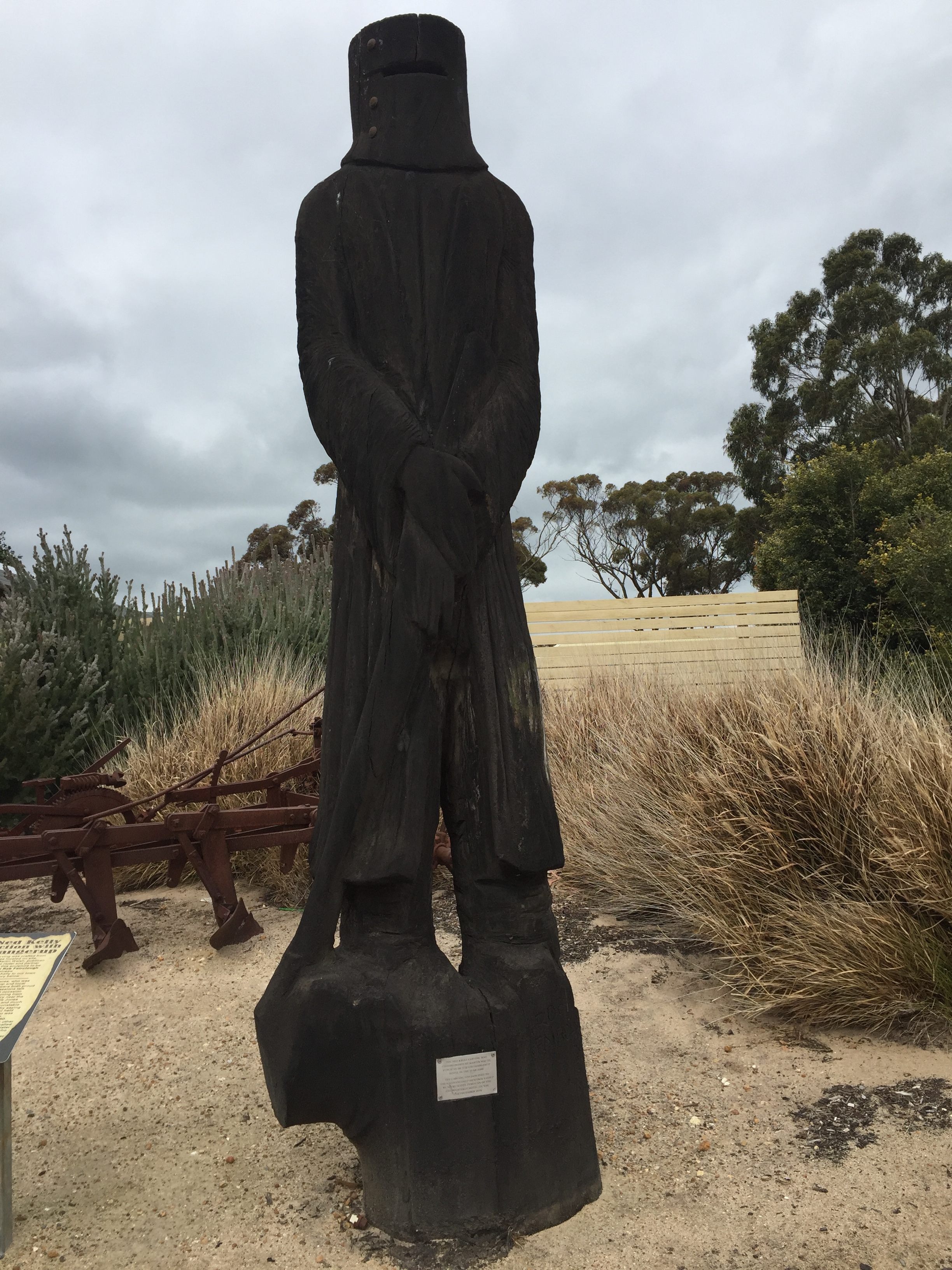 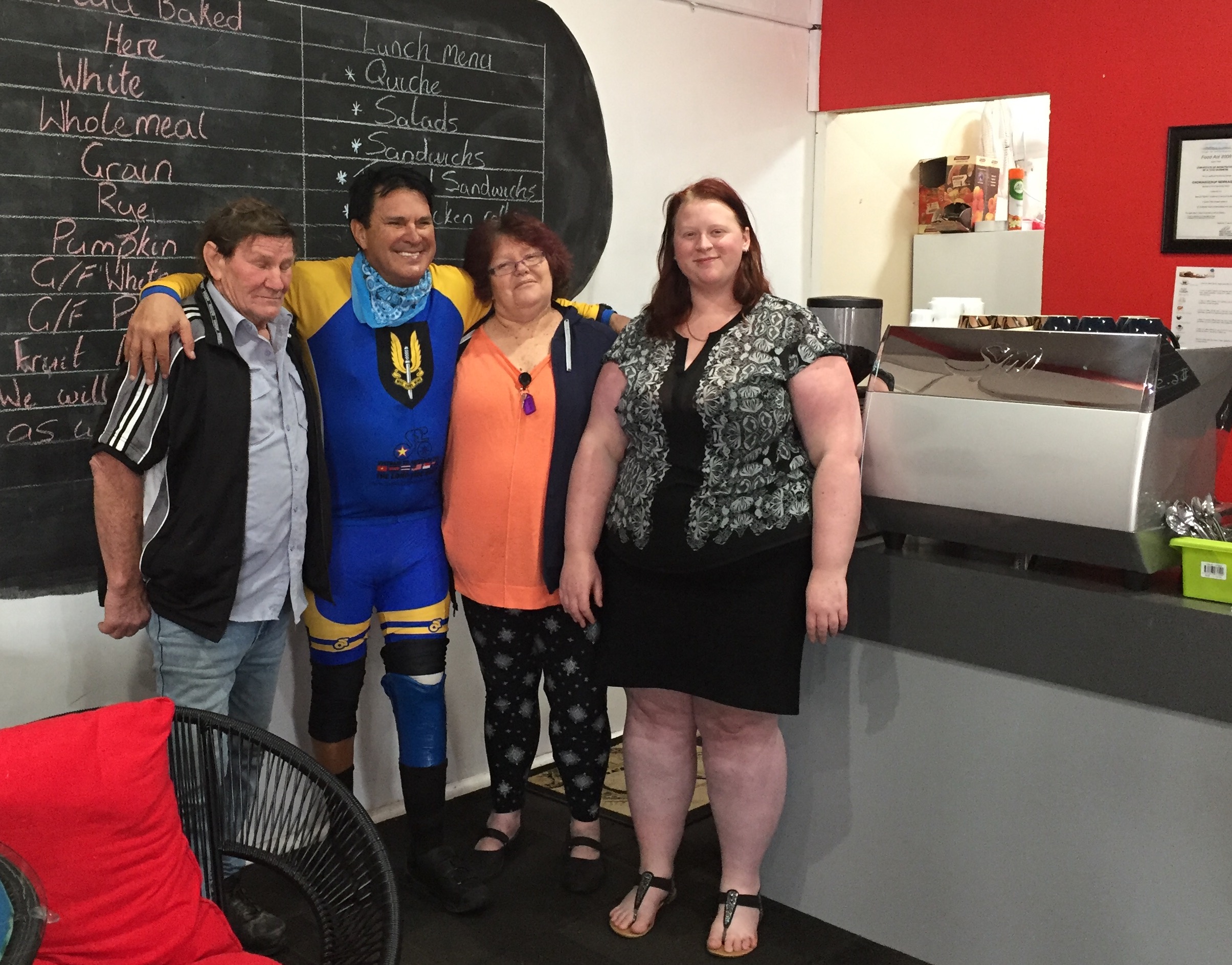 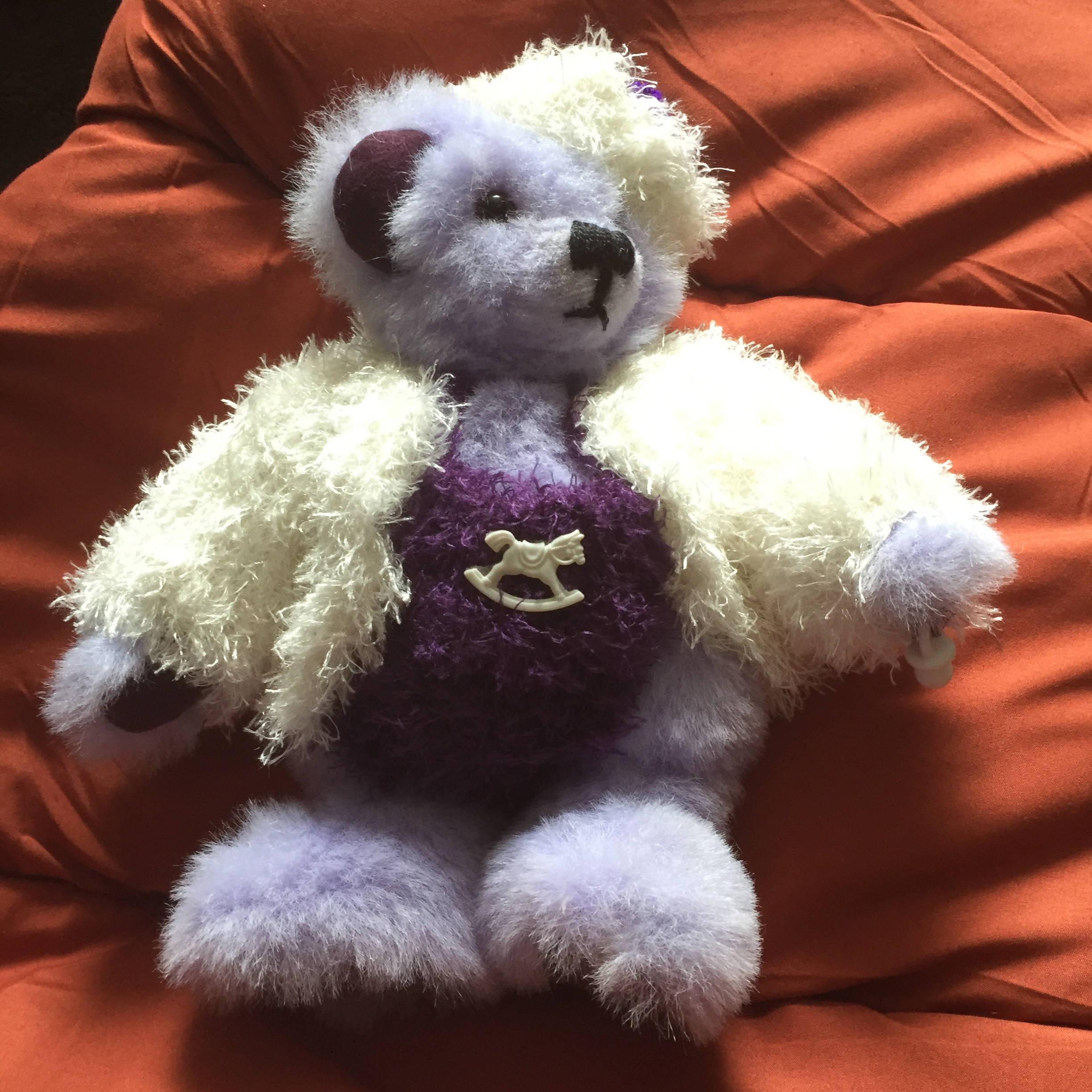 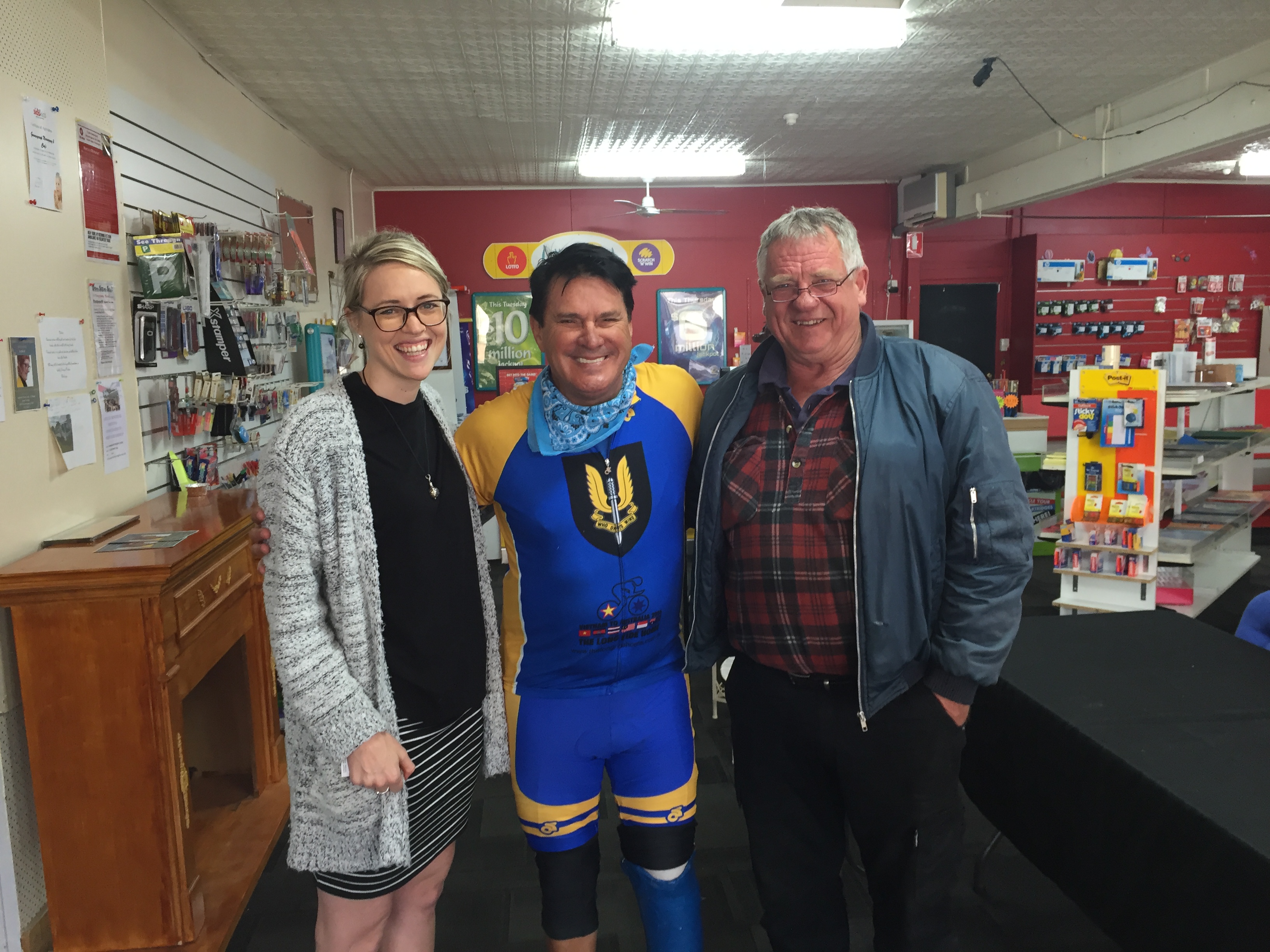 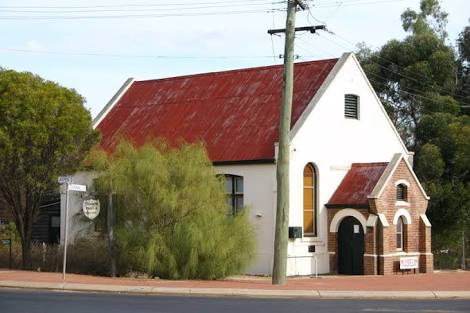 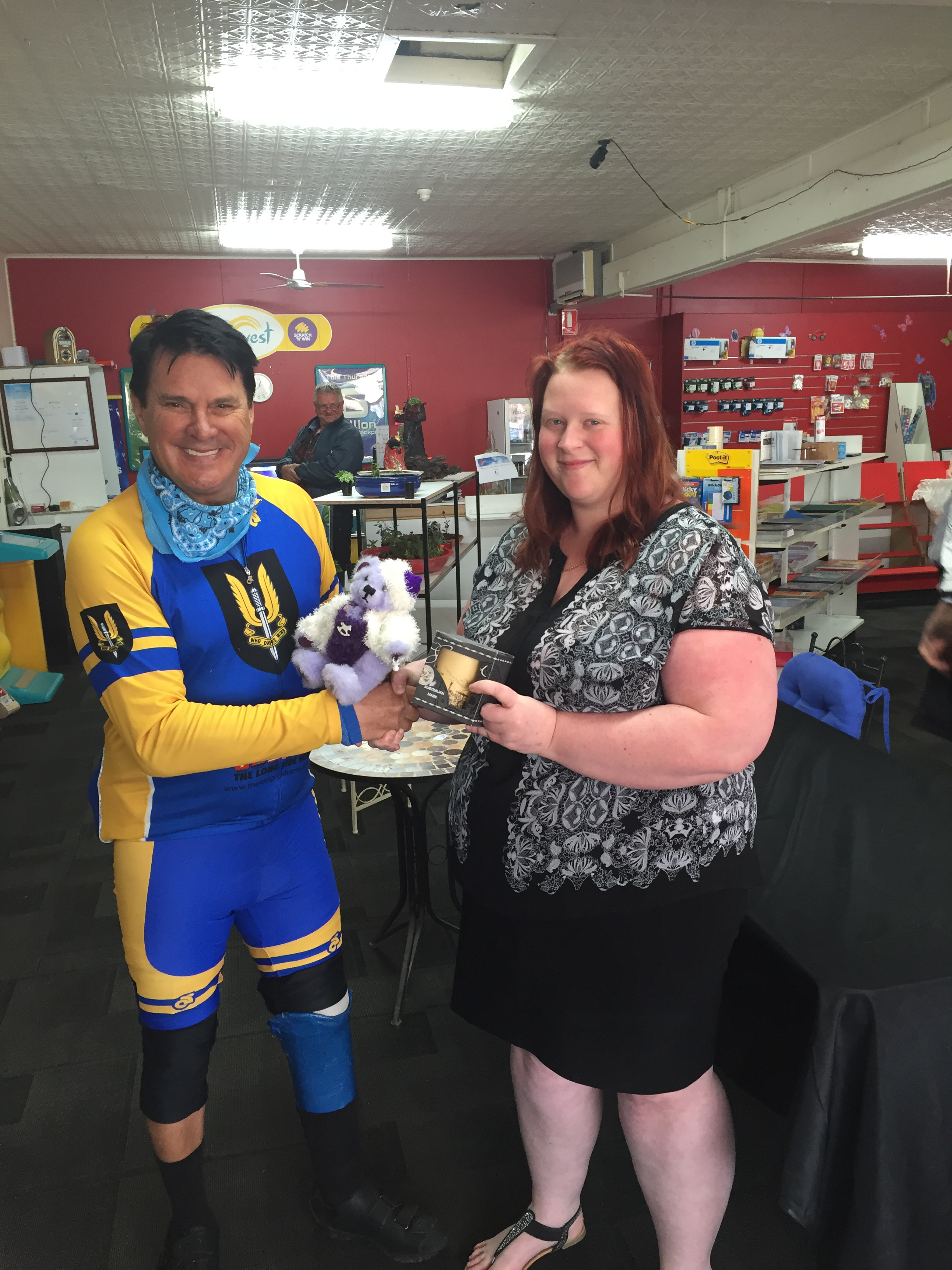 Day 77 of riding Katanning to Ongerup via Broomehill and Gnowangerup

A freezing cold night in the van last night. I could swear I was sleeping in a fridge but as dawn came up and a bit of cloud appeared the temperatures dropped and it was suitable for a mediocre day of riding without feeling like a brass monkey riding a bike. A quick goodbye and photo mission with Linda Kotterba (from Germany) staff at the BP Roadhouse and cafe. The owner Graham Jones who kindly looked after us last night including a donated meal and discounted campsite as mentioned in my previous blog.

Beautiful road conditions with limited hills made it delightful for riding today, being able to move a long a bit and to enjoy the outstanding views of the countryside, crops, canola flowers, historical sheep stations (Barloo Stud Farm), small country towns of interest and the Stirling Ranges in the distance.

Riding from Katanning to Ongerup today via a couple of small but interesting towns as mentioned above - Broomehill and Gnowangerup.

The town of Broomehill owes its creation to the Great Southern Railway, which was completed in 1889. The railway runs from Beverley to Albany. Broomehill is named after Sir Frederick Napier Broome (1842–96) who was then the Governor of Western Australia.

The townsite was gazetted by the Western Australian Land Company in 1890, which was recognised by the state government in 1897.

A group of settlers from the now extinct town of Eticup moved to the present site of Broomehill to help establish a township after the construction of the railway was completed. These settlers included the Withams, the Walshes, and the Curnows. These three families worked hard to establish the early structures. In 1892, a Police Station and Post Office were also established.

The official spelling of Broomehill was changed from two words to one in 1959.

The Holland Track, a well known walking track, begins in Broomehill and ends in Coolgardie.

The economy of the area is dependent on wheat and sheep farming although recently farmers have diversified into viticulture and aquaculture in the form of Barramundi farming.

The town is located 302 km southeast of Perth on the Great Southern Highway and is 20 km south of Katanning.

The main industry in town is wheat farming with the town being a Cooperative Bulk Handlingreceival site.

Arrived in Gnowangerup looking for a bit of warmth due to the weather starting to turn cold and warmth is what the team and I received. On meeting the local staff, Maggie Farr & Meagan Watson, at the News Cafe we were immediately welcomed like long lost family. The owner/manger, Phil Vardy threw in a welcomed (donated) mug of hot coffee to help me thaw out and get me stoked for the next 60 km. Koa Jaensch, the manager at Gnownagerup Community Centre, and her father Bevan dropped in. Koa taking interest in the long ride to take some photos and get a report on the ride as she had passed us on the road earlier on near Katanning.

Thank you to those kind folks who passed through the News Cafe and/or were passing through Gnowangerup and donated to the long ride home donation bucket.

Thank you kind folks from myself and the long ride home team. A special thanks to Phil Vardy who presented me with a nice coffee mug and small handmade bear made by his dear late wife Judith who made them to raise money for cancer research.

Many thank to the kind folks of Gnowangerup for their warm welcome and friendship towards the long ride home team.

Gnowangerup, named as the place of the mallee fowl in the Aboriginal Noongar language, is a town located 61 km south-east of Katanning in the Great Southern region of Western Australia. The townsite was first gazetted in 1908 under the spelling of Ngowangerupp. Local dissatisfaction with this spelling led to it being altered to Gnowangerup in 1913.

The local Agricultural Hall was opened on 20 July 1910 by Arnold Piesse, MLA for the Katanning electorate. A branch railway from Tambellup was open for service to Gnowangerup on 1 July 1912. It was extended to Ongerup on 6 January 1913. Train services east of Gnowangerup ceased on 13 October 1957.

The name of the townsite is Aboriginal, being derived from nearby Gnowangerup Creek and Spring, both names being first recorded in 1878. The name means "place where the mallee hen (Gnow) nests".

Local attractions at Gnowangerup include the Aylmore Mineral Springs which are located at the northern end of the town (the springs were what drew people to the area in the first place) are located near the Gnowangerup Swimming Pool off Park Road. According to Aboriginal folklore two warriors fought to the death and where they died two springs, stained red with their blood (the water is actually stained by the high iron content in the area), appeared. They still bubble up and make their way to the Gnowangerup Creek through the wetlands near the swimming pool. On 7th March 1934, at a cost of £400, the town’s first swimming pool was opened to the public. It was fed from the mineral springs which flowed at a rate of one litre per second. The pool was used until 1968 when it was closed due to health regulations. Subsequently the current pool was built.

The central appeal of the area is the beautiful and dramatic Stirling Range National Park which boasts 15 peaks over 900 m and 50 peaks above 600 m. It is the only significant mountain range in the southern half of Western Australia and offers the visitor jagged cliffs, sheltered gullies, superb panoramic views and a staggering 1500 species of flora - many of which grow nowhere else on the planet. There is a 42 km drive through the park, most of it on good dirt roads suitable for 2WD driving, which allows the visitor to experience an area in all its beauty.

The geology is fascinating. A brochure on the park explains: "The Range was formed over 1000 million years ago when this area was a shallow sea and sediment was deposited on the granite lowland. After the sea receded the area of the range sank. The surrounding area gradually eroded back to basic granite and the Range was slowly uplifted, eventually weathering to its present form. The Chester and Red Gum passes mark the courses of river that flowed south during the early stages of formation. Ripple marks can still be seen on the exposed rock."

For many visitors the Sterling Ranges National Park is about bushwalking.

It is in these mountain ranges that the Australian SAS conduct some of its training exercises due to the harshness rather than its beauty.

We are currently camped up, rugged up and overlooking the Sterling Ranges ready for another freezing night.

Warmest regards to you all,

Keep the donations coming in at www.thelongridehome.com.au

Truck, Juvy and Gunney
On the long ride home, In the South West of Western Australia